We present two recent projects from the field of museum informatics. The first project „Designing a Digital Museum Catalog App for Tailored Exhibition Experiences“ has been developed in cooperation with the „Haus der Bayerischen Geschichte“ (House of Bavarian History). The second project „Using Virtual Reality as a Means for Knowledge Transfer in Museum Exhibitions“ has been created together with the Regensburg Historic Museum.

Together with the cultural institution Haus der Bayerischen Geschichte (HdBG), we are currently devel-oping digital concepts and ideas for the upcoming Museum of Bavarian History , which will open in 2018 in Regensburg. Within this project context, we designed a Digital Exhibition Catalog App (DECA) that we would like to present at the Interdisciplinary Conference on Digital Cultural Heritage (DCH) 2017.

Moreover, traditional catalogs are created by an editorial team and are thus generic, pre-compiled lists of exhibition objects. These objects possibly do not reflect the individual exhibition experience of the museum visitors who may take quite different routes through an exhibition and, in the majority of cases, will not actually visit all the objects listed in the catalog. Finally, printed catalogs are obviously restricted to contain only text and images, but no multimodal content such as audio or video.

To address these issues of existing catalogs, we designed a prototype for the “Landesausstellung Bier in Bayern“ that can be used to create a tailored catalog of the visitors personal exhibition experience via a smartphone app. We implemented an iOS app that allows visitors to collect objects during their visit by means of QR codes and that motivates them to discover (and collect) further objects in the exhibition. The objects that can be collected and cataloged via the app are managed via an easy-to-use, web-based content management system. We are currently also experimenting with further gamification elements that increase the motivation of visitors to engage in the exploration and collection of digital artifacts in the museum.

As next steps, we are planning to conduct information behavior and user experience studies in a realistic exhibition environment, to investigate how users respond to such digital museum catalogs and how they like the aspect of a tailored catalog in particular.

The far-reaching implications of digitization affect politics and society, and to a growing extent they also influence and change cultural heritage institutions, such as museums. Accordingly, museum informatics are concerned with the interrelation of humans, information and technology in the museum context [2]. Digital applications in the museum range from tools that facilitate the curation and management of museum objects, to entirely new types of information systems for the presentation of such objects [3]. The fast-paced technological development in the consumer electronics market provides access to new technologies like augmented reality (AR) and virtual reality (VR). This enables new concepts for the design of multimodal learning platforms in the museum context, e.g. an immersive virtual reality experience that will drag the user into the time of a cultural artifact to convey the usage or the cultural context in an intuitive way.

We present a project in the intersection of museum informatics and VR. The project is a cooperation between researchers from the Media Informatics Group (University of Regensburg) and an expert for the regional history of Bavaria (University of Augsburg). The project is funded by the Regensburg Museum of History, as part of the recent “Meisterwerke in Bewegung” campaign. The main goal of the project is to create a multimodal learning concept that relies on an extensive VR experience [cf. 1]. The VR application will present various historic aspects to the museum visitors, ranging from local history to the history of urban construction and including everyday life stories of the 16th century.

More concretely, museum visitors find themselves in a virtual visualization of the Regensburg Neupfarrplatz in 1540. After a brief VR tutorial, visitors can explore two narratives in the virtual world: The first narrative allows visitors to interactively explore the construction history of the “Neupfarrkirche”, starting from the early pilgrimage church “Zur schönen Maria” to the current architecture of the “Neupfarrkirche”. The second narrative lets them dive into an everyday life scenario that illustrates historical practices of food consumption and cooking culture, also taking place in the setting of the virtual Neupfarrplatz. We use the Unreal 4 Engine as a basic framework for our project. For the exhibition, we will use the HTC Vive VR-System.

At the end of the project, we will investigate the pedagogical benefits of such virtually enhanced experiences and are planning to conduct a series of experiments that measure the learning outcomes when using the VR system. The results will be relevant not only for the usage of VR in museum contexts, but for any application scenario that will use VR for knowledge transfer.

I am currently attending the DATeCH 2017 conference in Göttingen, which is fully packed with interesting talks on „Digital Access to Textual Cultural Heritage“. The venue is right in the heart of the „Niedersächsische Staats- und Universitätsbibliothek Göttingen“, which is quite a decent place for a conference 🙂 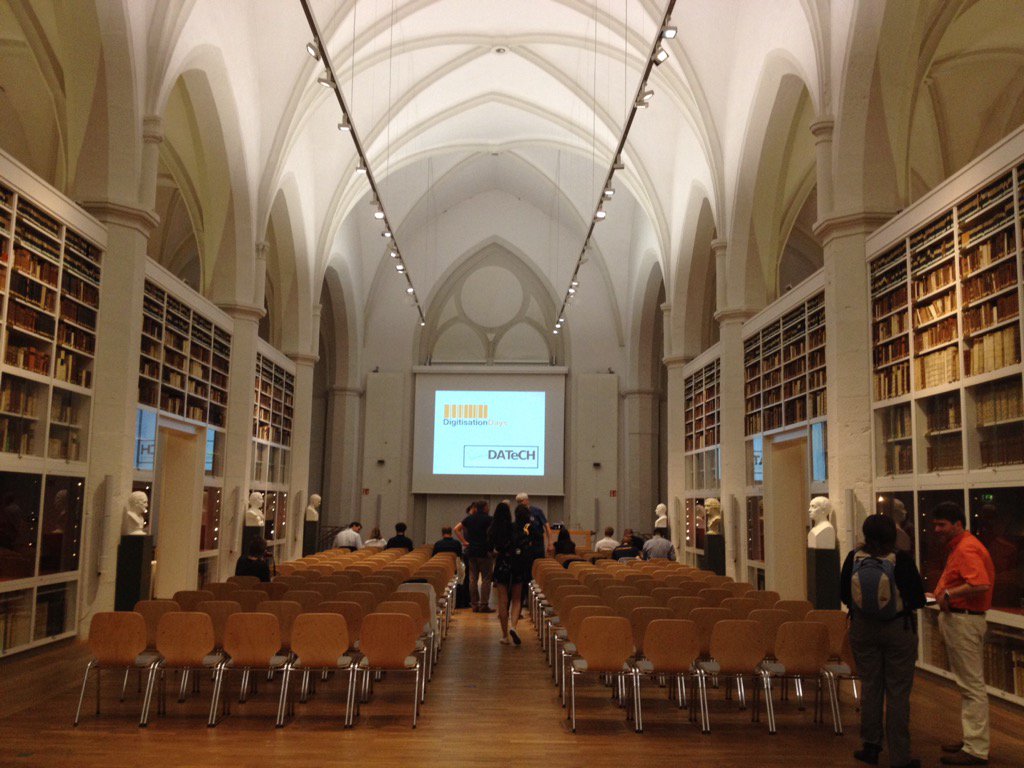 I will be presenting a research project that was created together with Sebastian Spanner.

Allegro: User-centered Design of a Tool for the Crowdsourced Transcription of Handwritten Music Scores

In this paper, we describe the challenge of transcribing a large corpus of handwritten music scores. We conducted an evaluation study of three existing optical music recognition (OMR) tools. The evaluation results indicate that OMR approaches do not work well for our corpus of highly heterogeneous, handwritten music scores. For this reason, we designed Allegro, a web-based crowdsourcing tool that can be used to transcribe scores. We relied on a user-centered design process throughout the development cycle of the application, to ensure a high level of usability. The interface was designed in a way it can be used intuitively, even by novices of musical notation. We describe the core features of Allegro and the basic transcription workflow. A first public beta test with 18 users shows that a crowdsourced transcription approach via the Allegro tool is a viable option for the encoding of our corpus of folk songs.

Related research from our group

The 15th International Symposium of Information Science (ISI) is taking place from March 13-15 at Humbold University in Berlin.

We are presenting a poster for „An Information System for the Analysis of
Color Distributions in MovieBarcodes“.

Right after the official program of the ISI 2017 we will organize a „Satellite Workshop on the Relationship of Information Science and the Digital Humanities“. For more information please check out the workshop website: https://is-dh.tumblr.com/